Friday morning Joe and I both worked at cleaning boat windows.  So much salt has built up on the outside of the windows just from being in this salt water environment, that it was getting hard to see out.  Joe hooked up the fresh water hose and gathered a bucket and squeegee and paper towels and rags and proceeded to clean all of them.  He also hosed down the rest of the boat exterior and cleaned off the many bug spots that we acquired on our trip here.   I worked cleaning windows inside and through our combined efforts we have a great view again!
While I went for groceries in the afternoon, Joe took an hour long bike ride through Dunedin and on the Pinellas County trail.  After I got home, he made blue cheese hamburgers--they were so good. 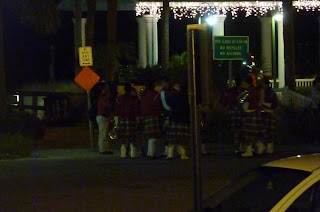 After dinner, Joe noticed something happening on the street in front of the boat.  We went outside and saw the Dunedin High School Scottish Highlander band (their motto is "Real Bands Wear Kilts!") with their bagpipers and traditional dancers playing and clogging and all heading towards the Bon Appetite restaurant across the street.
When they got there they performed for 15 or 20 minutes outside the restaurant, then turned around and headed back towards town, still playing and clogging.  Dunedin was settled by Scottish immigrants and proudly maintains its heritage. 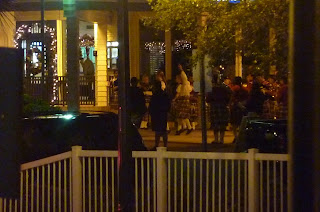 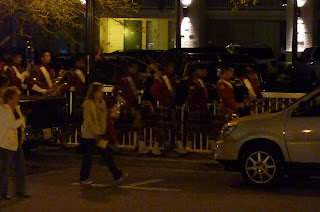 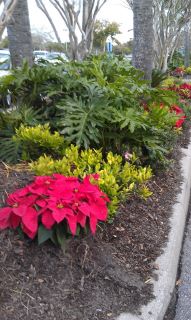 On Saturday I went shopping with my sister-in-law, Flora, in Tampa.  It is so cool to see poinsettias growing in the ground here; I took this photo in the parking lot of a Tampa shopping mall.  In 1973-74 Joe was in the Army and was assigned to one of four missile batteries around Homestead Air Force Base, so he and Kris and I lived in government housing near the base.  Many people had poinsettias cascading from the roof down the side of their house and I always loved that.  I haven't seen that around Dunedin, but Flora mentioned that she wants to plant some around their house. 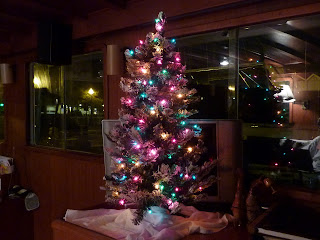 While I was gone, Joe put up the little Christmas tree that Bill and Eileen lent to us.  It's so adorable... 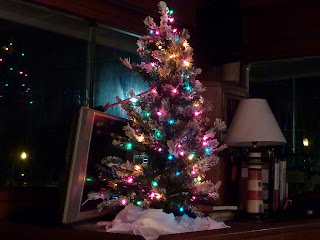 ...but it tends to fall over, so I had to bungee it to the TV set in back of it!

After setting up the tree, Joe rode the bike and stopped in at our favorite fishmonger where he bought grouper cheeks for our dinner; they're the Florida equivalent of Minnesota's walleye cheeks, but bigger.
At 4 pm we met Bill and Eileen to watch the annual Dunedin Christmas parade through the historic part of town.  I totally forgot to bring the camera and my phone was dead so I couldn't take any photos which is too bad because it was a nice parade that lasted about 90 minutes.  There were five or six different bagpipe units in the parade as well as the usual local politicians, military units, dancing schools, and fire trucks.  Near the end of the parade was a pirate ship float with pirates throwing Mardi Gras beads; Eileen and I each got some.  Of course, the grand finale was Santa, who was in a wagon pulled by two draft horses and he naturally got the biggest cheers.
While the temperature was in the 60s during the parade, there was a bit of a wind and the air was damp and chilly.  So after the parade we decided to stop at a local bar where--lucky for us--they were handing out free hot spiced wine that warmed us up nicely.  We had a couple of rounds of drinks, then left to have dinner.  On our way out of the bar, they had finished up the hot spiced wine and were then handing out spiked eggnog that was really good.  We all walked back to the marina and Bill and Eileen headed home to eat.  I made big salads and Joe sauteed the grouper cheeks which were absolutely succulent. 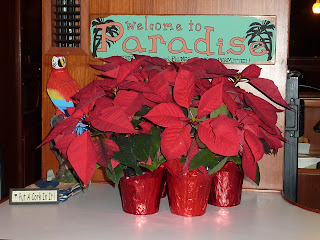 Today, Sunday, John and Flora and Bill and Eileen all came over around 1 pm for dinner and a cruise.  I was so delighted when John and Flora brought in four poinsettias as a boatwarming gift!  We may not have Christmas lights up, but it's looking pretty festive in Paradise.

John made lasagna, Eileen made a salad, and I made bread.  Everything was outstanding and after we ate, we cruised down to Clearwater. 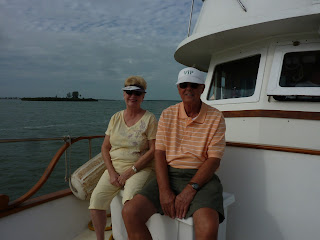 The sky was cloudy and though it was windy, we had the wind at our back so sitting on the bow was nice and warm. 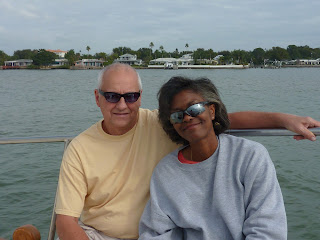 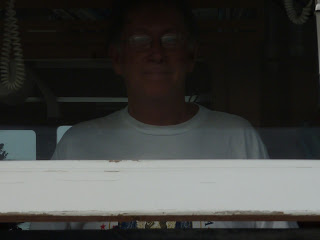 Cap'n Joe at the wheel 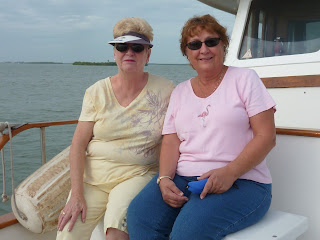 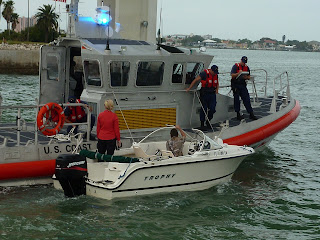 When we headed back, we saw this small boat get stopped by the Coast Guard.  We couldn't tell what, if anything, they had done wrong, but it looked kind of serious.

After we got back to our slip, I put together the cannoli that I made this morning and we enjoyed that as a final treat before our guests departed.  We had such fun that we're planning to do it again next Sunday!
Posted by MaryJo Boyle at 8:42 PM