UFFDA!!!!!  Those are two days and a night that I won't soon forget and I surely don't want to repeat! 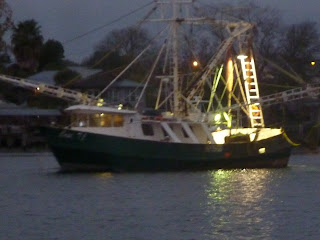 We got up at 6:45 to get ready to leave, and though it was still dark, the shrimp boats were already heading out for the day.
Joe went over the available weather information from several sources and we pretty much decided that we were going to wait for a few days to make the Gulf crossing; the forecast conditions seemed too iffy to us and Joe's experience on Lake Michigan was that when the waves are big it's a really unpleasant experience.
So we relaxed over our coffee. 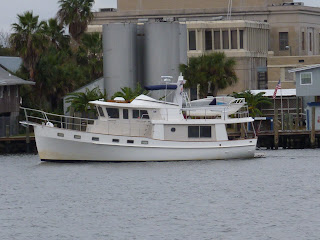 Then Muddy Waters cruised by at 8:30 on her way to make the crossing (Muddy Waters has stabilizers, Paradise does not).  Joe haled Michael on the marine radio and they chatted for a few minutes about the pros and cons of going vs waiting.  After they left, we discussed it and decided to try it because it would be a week before conditions were forecast to improve.  You can see the water on the GIWW looked calm and we were hoping that was somehow a good sign for us. 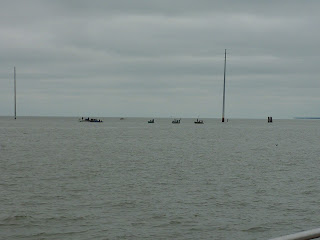 By 9 AM we were heading out.  This was one of several groups of oyster fisherman out along the GIWW. 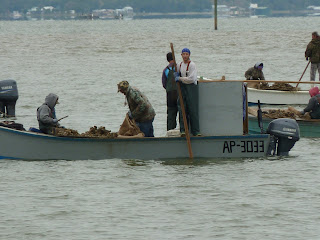 They use big rakes in pairs to gather and scoop the oysters up into their boats.  The piles in the boats are oysters they've already harvested. 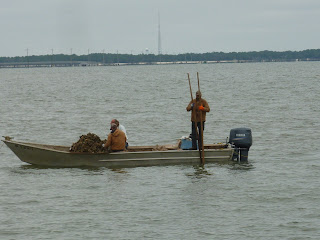 Yum, wish we could have gotten some of those!


Notice how calm the water is? 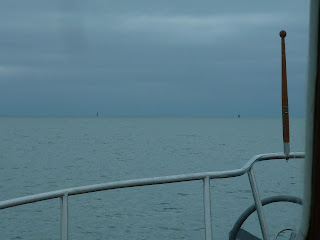 We didn't leave the GIWW from Apalachicola; instead we went east about 20 miles to Carrabelle and entered the Gulf there as all of the other Loopers had done, hoping that the waves would be lower closer to the Florida coastline.

These are the first buoys as we enter the Gulf at noon on Thursday.  See how calm the water looks? 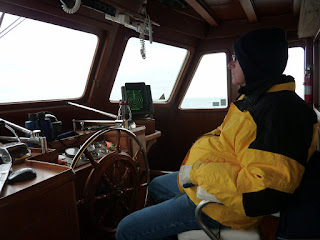 Look Ma, no hands!  Our auto-pilot quit working on Lake Michigan when Joe and John brought Paradise back to Minnesota in May.  That wasn't much of a problem, because the river boating that we did doesn't allow for its use--too many turns and logs and other boats.

But Joe decided to try it once more, AND IT WORKED!!  I can't tell you how thankful we were to have auto-pilot in the next 24 hours. 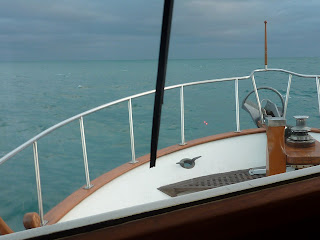 Love the amazing colors of the water and sky against the white and the wood in this photo.   I took it through the windshield; that red dot near the front of the boat is a reflection of a light inside the pilothouse.  If it weren't for that red dot and the windshield wiper, this would have been a pretty cool photo.
See those nice friendly swells and the cute little whitecaps? 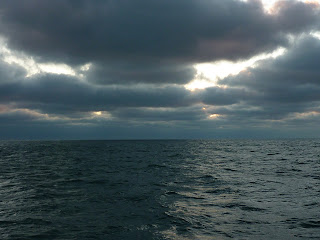 This was taken after sunset, while there was still some light.  You can sort of see the swells that we now experienced.  But they were kind of fun, like being on a gentle rocking horse.  Paradise took them in stride.

Inside the pilothouse, we switched from the white overhead lights to the red lights to facilitate night vision. 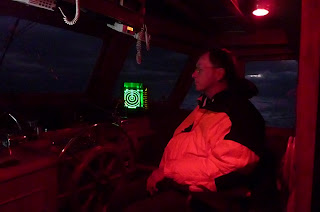 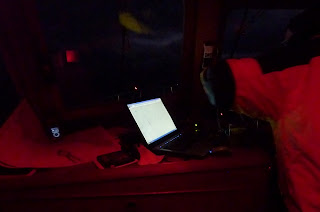 Here you can see our paper charts, Joe's laptop with our navigation software that also shows the charts, and the GPS that the laptop is connected to so we always know our position in relation to the charts.


The auto-pilot was so great, we just had to keep watch on the laptop and the radar to make sure that we were staying on our pre-determined course and that there were no boats or other obstacles in our path.  Without the auto-pilot, it would have been impossible to steer while sitting down; the wind and waves were blowing and pushing us all around and trying to stay on course would have been an aerobic activity.
The sky was completely clouded over and it was pitch black outside; from the radar and marine radio conversations we knew there were other boats within a few miles of us--but we couldn't see a thing, not even the waves.
At some point during the early evening, the waves and swells that had been 1-2 feet grew to 2-3 feet.  We weren't worried because we felt that we had secured everything adequately and Joe said compared to Lake Michigan last spring, it was a piece of cake.
Then the waves got to be 3-4 feet and things started shifting and rattling inside the cabinets.  I had a headache so I laid down for about an hour and then took the helm so Joe could rest a bit.  We both knew that he was going to do the majority of driving during the night; he tried to get some rest, but there was so much noise that he finally gave up trying to sleep and instead started trying to stop all the rattling.  After a while, Joe took the wheel again and I tried to continue with the noise abatement program, without much success, although I was able to stop the barstools from escaping their bungee cord by turning them upside down and re-connecting the bungee cord by completely encircling the legs instead of just going through them.
In the middle of the night things really started getting dicey.  I don't know how high the waves got but stuff started flying around in the galley and the salon and our tempered glass-topped computer desk fell over.  Fortunately, it wasn't damaged and the monitor and printer had been nestled onto our bed before we left Apalachicola.  I took the wheel so Joe could try to control the situation and he had a really hard time walking around because the boat was being tossed around so much.
Joe turned the desk upside down on a settee cushion and shoved it over by the salon table which he had lashed to the stair railing earlier.  He also tried to secure the hard drive, keyboard and mouse.
After he took over the wheel he told me he didn't want me walking around the boat at all until the waves settled down.  We only had 7 or 8 hours left to go until we reached Clearwater--I hoped I wouldn't need to go down to the bathroom.
We gritted our teeth, and although we were both already exhausted, we tried to make light of the situation by imagining what it must have been like for sailors centuries ago who didn't have depth finders and auto-pilot and navigation software and marine radio and weather forcasts on the internet. 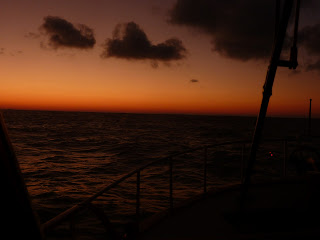 About 3:45 I took the wheel and I could just barely make out the horizon even though sunrise wasn't for another 3 hours.
About 5:45 we could start seeing the waves, but they were still pretty significant. 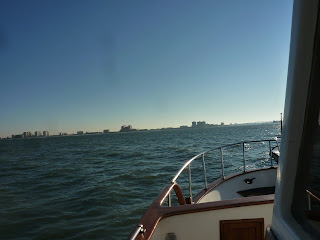 A little before 7 am, the Clearwater skyline came into view.  Now we had to dodge crab pots that are everywhere.  You don't want those tangled up in your props!  Fortunately, we made it through without hitting any. 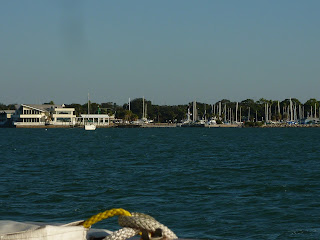 We cruised into the safety of Intra Coastal Waterway (ICW), through Clearwater and north a couple of miles to Dunedin.  The Dunedin marina, where we hope to stay for a month, won't have a spot for us until Monday so we're anchored out across the channel from it, not far from Caladesi Island.
We were both exhausted, but I managed to send texts to our daughters and I called my brother Bill to let them all know we'd arrived safely.
Joe started restoring order in the salon while I immediately went to bed, then he came down. 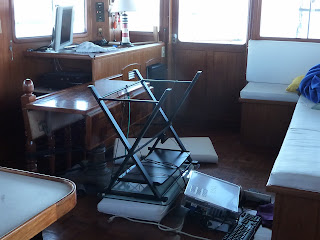 The carnage in the salon that Joe had to contend with... 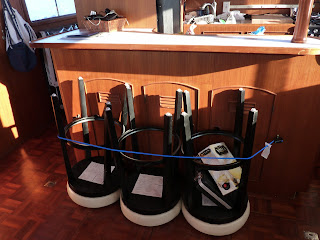 The barstools made it safely through. 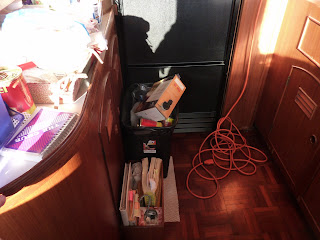 We piled up the stuff that had been flying around if we couldn't shove it into a cabinet.  When I opened the refrigerator this afternoon, everything on the bottom shelf of the door fell out onto the floor. 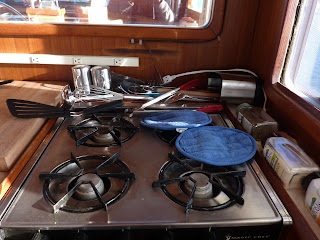 All my utensils and the knives had flown onto the floor during the night.  About 1/2 cup of olive oil and 1/4 cup of onion powder got spilled making the galley pretty fragrant. 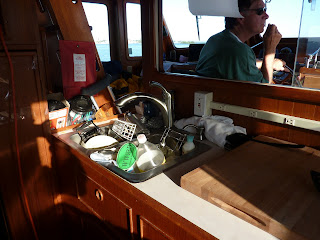 We had shoved things into the sink to try and keep them contained, then stuffed rags in to try to keep it all quiet. 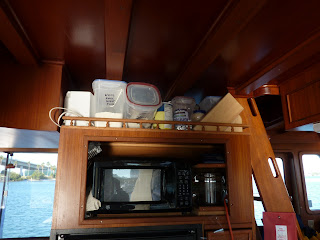 Fortunately all my flours and other dry ingredients didn't fly off the top shelf, although some tipped over. 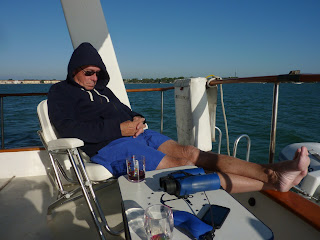 After we both had a (much too short) nap, I took a shower and we went out to soak up some warm Florida sunshine.  Joe said he felt like a zombie from the lack of sleep and he dozed off during happy hour on the aft deck.

When it started getting too cool to sit outside, I went down and slept for another hour, then came up to clean up the kitchen, check emails, and update the blog.  Joe crashed at 5:30 and hasn't been heard from since.
Tomorrow we'll dinghy into the marina where Bill and Eileen will pick us up.  We'll do lunch and get a few groceries and see how Dunedin has changed in the nearly 2 years since we were last there.  Dunedin is where we plan to establish residency so we'll need to get Florida drivers licenses and register to vote in the near future.
Time for me to catch up on my sleep.