Last Thursday we arrived (exhausted) in Dunedin, and the past week has made every bit of the trip worthwhile.  On all of the last seven days we've had warm sunshine and mostly blue skies--in fact Monday and Tuesday were what I like to call '"Chamber of Commerce days"--the kind of days that give Florida its nickname "the Sunshine State".  The temperatures were in the high 70s and low 80s and there wasn't a cloud to be seen. 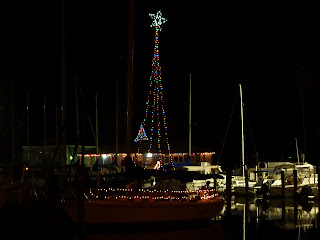 We got into the marina on Monday and discovered that, while the brackets for the ramp to get in and out of Paradise are about 42 feet from the bow, the finger pier leading out to our boat only extends 35 feet.  A big problem!  So while Joe was able to get off the boat by walking on one of the ropes that ties Paradise to a piling, that's obviously not something I, nor most or our guests, can do.  So I was stuck on the boat until we figured out a solution to this problem.  The owners of the excursion boat (m/v Parrot-Dise) on our port side offered to help Joe back Paradise in so that the ramp would be in a usable place.  Unfortunately, that would leave us unable to use the dinghy if we want to go out to one of the islands near here.  Using a step ladder was discussed, but that sounded wobbly and dangerous.  Finally, Joe figured out that he could move the brackets that hold the ramp and install them at a point closer to the bow so the ramp will work.  Problem solved.  Oh...yeah...except that now anyone boarding or leaving Paradise has to climb over the railing before entering or exiting, and Joe has to tie up the ramp when it's not being used because otherwise the rising and falling of the tide causes the ramp to get caught between Paradise and the finger pier.  We never knew that life on a boat was going to be so COMPLICATED!
These are some night scenes of other boats in the marina, the white-linen-tablecloth restuarant right in front of us, and a small bar overlooking the water.  There's also a fish market here next to the bar, but it's not as good as the one 6 blocks away that we found on Sunday. 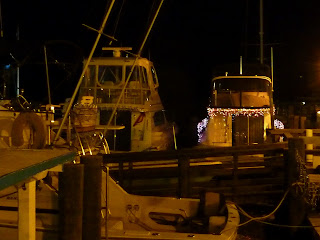 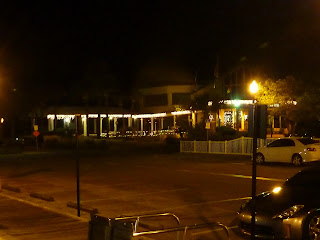 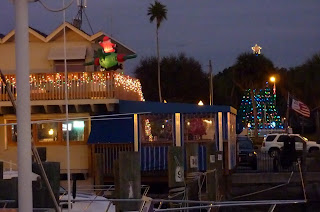 Some of you have asked how my leg is doing.  Since we've been in Dunedin we've gone shopping several times and I've walked from way back in the parking lots (the handicap spaces are always taken because of all the senior citizens in Florida!) and around Sam's Club, Costco, Walmart, and other stores and it's really helping to build up my muscles.  Around the boat I use just one crutch, when we're out I use two crutches but I can feel that I'm getting stronger every day.
I'm due for a six-month followup to my 7/1/11 surgery, so I spent several hours on the internet and the phone on Monday trying to find an orthopaedic surgeon who would see me here.  I was turned down by a couple of them and directed to a place in Tampa where I hope they'll accept me.  All I need is a couple of x-rays and someone to look at them and say that I'm progressing appropriately but none of the doctors' offices I first talked to will see me because I had surgery elsewhere.  With luck, I'll be able to see someone within a few weeks.

On Tuesday, Joe brought the folding bicycles down from the flybridge and I rode one for the very first time; I think it was the first time in more than a year that I've been on any bike at all.  It gave me a wonderful sense of freedom after being in a wheelchair and using crutches for the last seven months.  It was also a bit scary because after all that time I'm pretty wobbly and afraid of falling.  I rode several times around the marina parking lot to build my confidence and try to get a feel for the bike, then Joe and I rode a for few blocks until my muscles started to cry "Uncle"!
Later we went to Bill and Eileen's and Eileen made chicken in filo dough for dinner--OMG it was good.  After dinner Joe joined Bill and my other brother, John, at their weekly poker game; Joe got wiped out, John came out even, and Bill cleaned up. 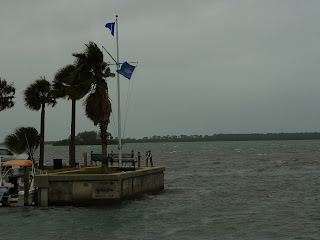 The weather was great yesterday until mid-afternoon when clouds started gathering and the wind picked up.  The wind grew stronger as the day wore on and eventually reached 30-35 mph.  There were white caps on the ICW and big swells were coming into the marina making all the boats here roll and strain against their lines.  Waves out on the Gulf must have been huge.  It seemed like Mother Nature was having a hissy-fit!
We didn't mind the rolling so much until Paradise started banging into the pilings on the starboard side with the wind so strong that we couldn't push or pull Paradise over to get fenders between the pilings and the side of the boat.  Also, the tide was going down and if we couldn't get fenders in place to keep the boat away there was the very real danger that two of the pilings could get wedged underneath the railings and then push up on them as the tide continued to fall--possibly ripping them right off the boat.
I suggested we open all the windows and doors so that Paradise would offer slightly less resistance to the wind; we tried it and it worked just well enough so that we were able to get the fenders where they needed to be.  WHEW!  Our hearts finally stopped pounding and we calmed down when we saw that our efforts were successful.  Late in the evening the wind died down and we were able to sleep. 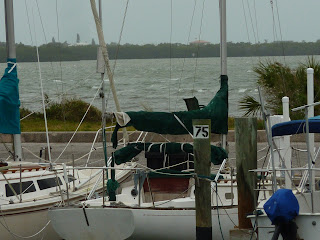 This morning it was only in the 50s, but it was gorgeous outside, so we didn't mind the cool temps, although we were accused by one of our marina neighbors of bringing the cold with us, and Brother Bill called to ask if the ice-breaker boat had gotten through to us yet!
Today was a work day for both of us on Paradise--laundry and boatkeeping for me, boat maintenance for Joe.  Joe finished early enough to make an excellent dinner with crab, rice, and lots of peppers, onions, and garlic. 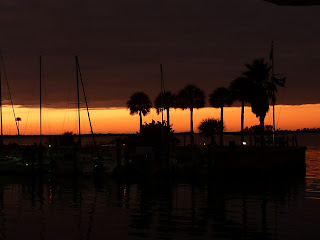 While he cooked, I captured this final shot of the day looking out from our slip in the marina to the ICW.
Posted by MaryJo Boyle at 9:12 PM