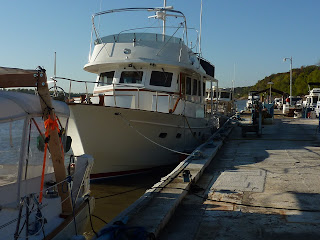 We planned another short day today, so we slept late; actually, Phil was up early, Joe got up with the alarm and I slept late.  But we couldn't leave anyway until Larry and Brenda pulled out because of how the marina crew squeezed Paradise in between the sailboat ahead of us and Abreojos behind us. 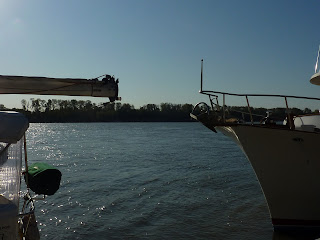 This is how close our bow pulpit was to the end of the sailboat's mast...I was on the bow when the marina crew maneuvered Paradise into position yesterday and it looked too close for my comfort.  But they added lines on the side of Paradise and we didn't move forward or back. 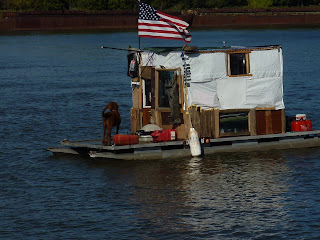 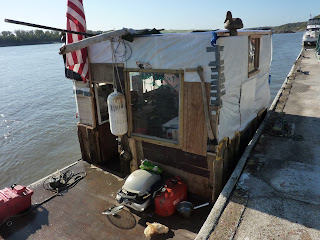 Not long after I got up, look what came putt-putting up to the marina gas dock..it was the shanty boat from yesterday.  Of course we were all tickled to see it and curious about both the boater and his vessel.  He turned out to be a friendly and well-traveled fellow named Wayne, and his dog Bentley was just as friendly and also very well-mannered.
Wayne told us that he has done the Great Loop in sections and was regaling us with stories about his adventures and the sights he'd seen and the people he's met.  Like us, he is headed for Florida to spend the winter and he's just as anxious as we are to escape the chilly weather we've been experiencing.  I tried to get some photos of the interior of ShantyBoat... 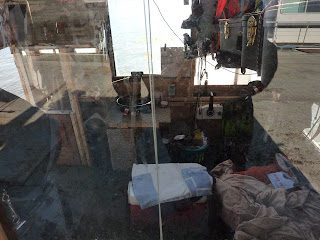 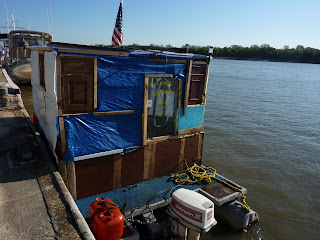 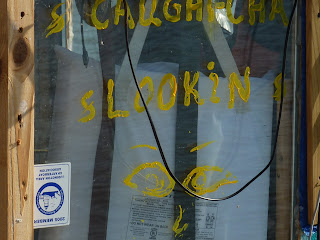 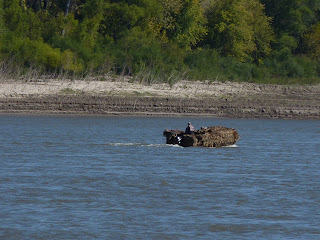 We finally were on our way and passed this boat disguised as a duck blind--folks sure take their duck hunting seriously around here! 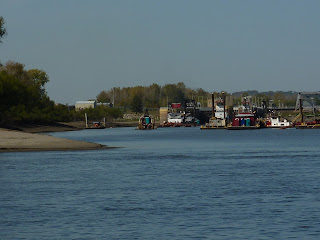 This is the confluence of the Kaskaskia River and the Mississippi--at least this one has a marina.  I still can't get over the Missouri River's discreet entrance to the Mississippi...

We had a great day of cruising, the sun was shining and the temperature got up into the 60s, so we spent a good part of the day on the flybridge. 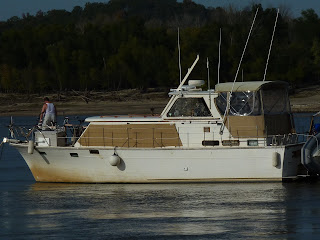 We finally reached our destination--an anchorage about 60 miles south of Hoppie's.  We traveled with Abreojo today, so Larry and Brenda pulled in next to us.  Although they've nearly completed the Great Loop, they originally started out from Texas.  This is their first experience with the fast Mississippi River current since their 2 previous nights on the Mississippi they were at marinas.
You can see the sandy beach on the other side of Abreojo; that's what it's been like for many miles since we left Hoppie's--deserted sandy beaches. Can't help wondering if they're also deserted in the summer.

This is a great anchorage with faster wifi (on Joe's cell phone) than any wifi we've had since we left Sunnyside.
We have a 10 hour day tomorrow, so it's time to close for the night.
Posted by MaryJo Boyle at 9:32 PM