We woke to heavy cloud cover this morning, but the tempature was in the low 60s--a definite improvement from the chilly temps we've been having.  Joe wanted to get all the way to the Cairo, IL area and we were on our way by 7:30.   Brenda and Larry in Abreojos stayed behind at the anchorage for a while so we were cruising alone.

We mostly saw trees, deserted beaches, and barges for the whole day.  At one point Joe said he hadn't expected the cruise on the Mississippi to be so boring; I reminded him that boring is good--we've already had plenty of excitement in my opinion. 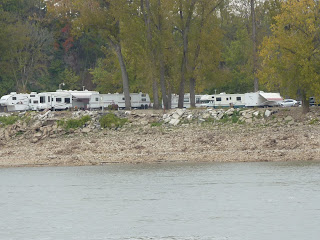 We've seen quite a few camping spots like this all along the river.  Joe says they would be a good place to put someone in the federal witness protection program. 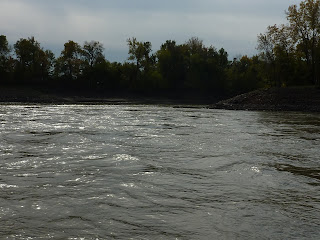 Several times today we encountered turbulent waters caused by special dams on the bottom of the river that are supposed to help keep the channels from filling in.  They are placed at bends in the river.  We were warned not to try to pass a barge in a couple of those places where the river was especially narrow.  At one point, Joe found out two barges were coming around the bend so he turned around and backtracked until they were clear of that area.

The current was really carrying us along today; we were doing as much as 12 knots at times and our average speed was 10 knots for the day, even after losing 30 minutes or so to avoid those barges. 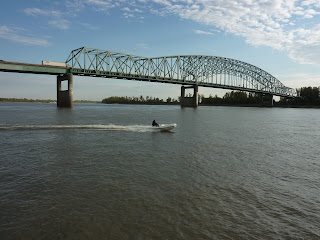 We made 94 miles today in just 9 hours and settled into an anchorage just north of this bridge by Cairo, IL.  Joe decided to take the dinghy out "just to make sure it's working properly" and had fun buzzing around.  He managed to disturb a few Asian carp that did their flying act for him, but fortunately none hit him or the boat. 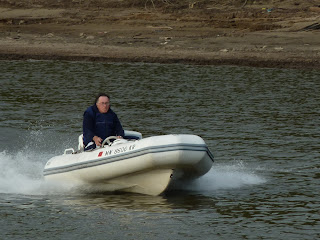 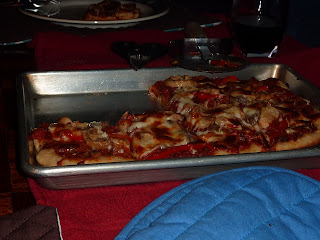 We made red pepper, mushroom, & black olive pizza for dinner tonight.  I made the dough early this afternoon in the food processor, then we finished assembling it at dinner time.  It's a recipe we've been making for a few years, but I think this one was the best we've ever made.  Or maybe it's just the setting.  =0) 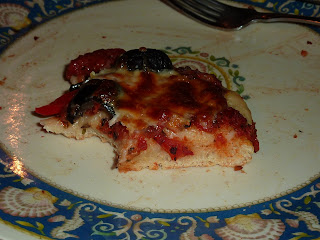 Tomorrow we head up the Ohio River and, if everything goes right, we'll make it about 60 miles to Paducah, KY.  Temps are supposed to be in the high 70s!
Posted by MaryJo Boyle at 9:55 PM