Note: In previous entries I have mentioned "barges" on the river, but what I was describing are correctly called "tows"--meaning the combination of a towboat attached to containers that are individually called barges.  So from now on, I'll refer to tows, towboats, or if I'm talking about the containers themselves, I'll say barges. 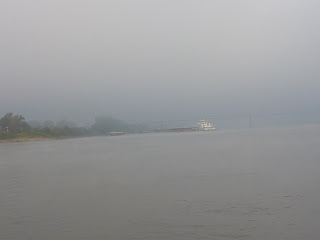 We woke to moderate fog this morning, but headed out anyway.  This is what we saw when we reached the confluence of the Ohio and Mississippi Rivers at 8:15--fog and moving tows and anchored barges everywhere!  It was pretty scary.  All three of us were in the pilot house and Joe said "All eyes on the river!"  Even without the fog, we hadn't seen anything like it on the Mississippi.  Joe throttled way back and inched Paradise through the maze of vessels and fog.  Making it worse was that the fog made it impossible to see the buoys marking the channel. 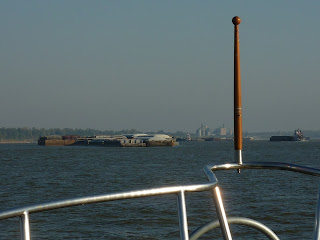 About 9:15 the fog had pretty much lifted and Phil commented that it looked like we were in a major seaport instead of the little town (population 3,000) of Cairo, IL.
Going upriver on the Ohio our speed was less than 6 knots compared to the 11 or 12 knots we were moving downriver on the Mississippi.

Once we got past Cairo, there wasn't much activity and we cruised along in sunshine enjoying the trip. 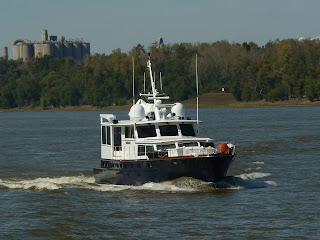 Before long, Joe noticed Summer Song coming up behind us.  Summer Song is the 65 foot boat owned by Stan Hubbard that was in back of us at Sunnyside, our home port.  The crew was bringing her to Ft. Lauderdale for the winter.  The captain hailed us on the marine radio and chatted with Joe for a few minutes.  It turns out they had spent Sunday night at the same anchorage as Abreojos.

We reached Paducah, KY and I was hoping to stop there and see the old town because I read somewhere that there's a nice waterfront for tieing up... 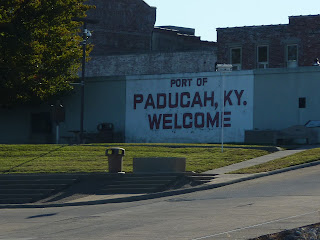 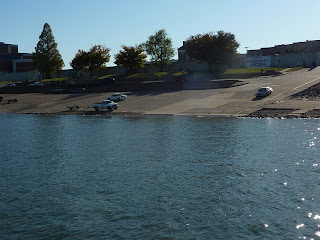 ...but unfortunately not for any vessel that isn't trailerable.  So we had to keep going. 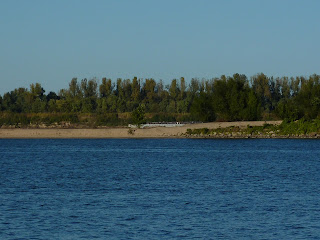 We reached our anchorage on the north side of Paducah about 4:30 and settled in for the night. 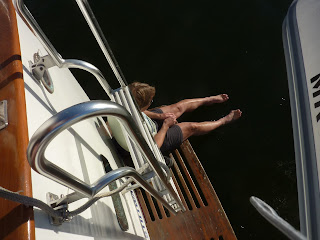 Phil has been wanting to go swimming ever since we left home, but of course the temperatures have been too chilly to make that an appealing idea.  Since the weather was so much nicer today, Phil decided maybe he'd take a dip here.  After sitting on the diving platform with his feet in the water he said that the water temperature wasn't too bad, but the water had stuff floating in it that took away his desire to swim--at least for today.

No wifi and no bars so we were incommunicado for the night.
Posted by MaryJo Boyle at 8:53 AM