Got the doo-hicky for transferring photos from the camera to the PC so we're back in business and I've added the missing photos!
No photos again.  If you've been following this blog you know that a while back our card reader quit working and I couldn't download photos from our camera to the computer.  A couple days later the darn thing decided to start working again so I've been using it for the last few weeks without too many problems.  We wanted to buy a new one, but we haven't been to able to get to any stores that carry them.  Tonight it quit again so I'll just do my posts without photos until we can get replacement equipment or it spontaneously decides to start working again.  Technology can be so agravating!

It was 41 degrees this morning when we woke up, but by 10 it was up to 58 degrees and temps eventually hit the mid 60s with mostly blue skies for a while, then it turned mostly cloudy.


Our plan for the day was to go to the municipal dock at Fort Walton Beach where we can stay over night for free and get a free pumpout and water, although there's no electricity provided.  The free pumpout facility is provided by the Florida Clean Boating Partnership. Since the distance is only 12 miles or so, we had a relaxed morning and didn't pull out of our anchorage until 10:15. 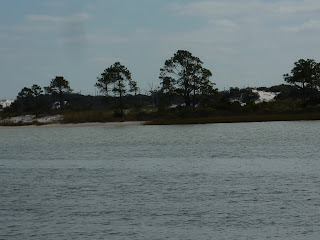 It was nice cruising without too much wind today.  Santa Rosa Island, part of the Gulf Islands National Seashore, seems to go on forever. 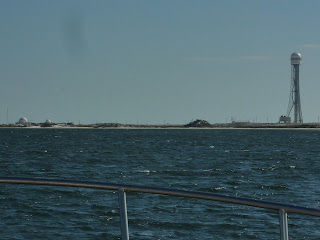 We passed military radar domes located on Santa Rosa Island that are used by the the Navy and the Marines in Pensacola and Eglin Air Force Base near Fort Walton Beach.

Speaking of military, in my blog yesterday I forgot to mention that all last evening we heard what at first I thought was thunder, but Joe said it was military war games being conducted.  I wonder if real estate agents in this area tell prospective buyers that they can expect that sort of thing, and I wonder if it’s on a regular basis. 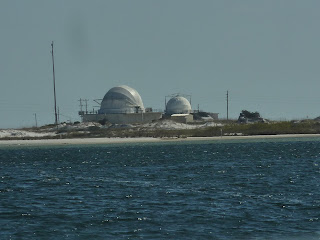 As we approached Fort Walton Beach, we saw a cemetery right on the waterfront—they’ve got a nice view. I wasn't quick enough to get a photo, though. 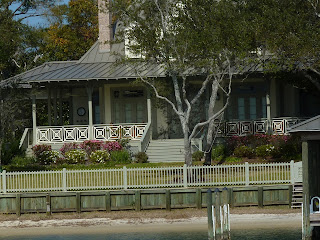 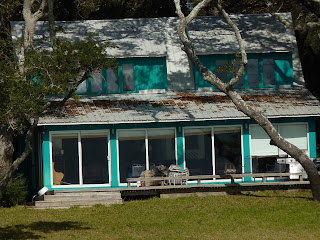 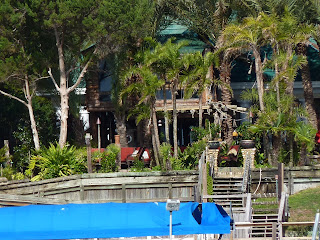 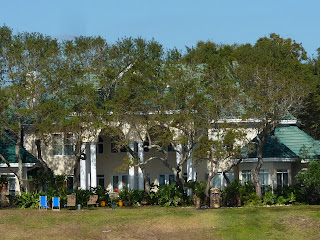 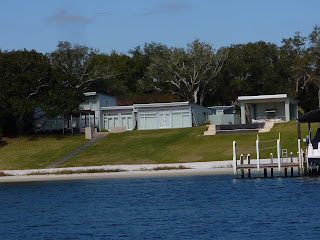 There was a house with a swell pool... 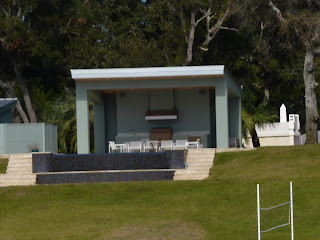 ...I'm guessing that it's one of those infinity pools. 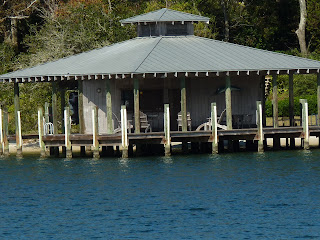 We saw a fancy-schmancy boat house that looks like it’s fully equiped for entertaining and maybe even overnight guests. 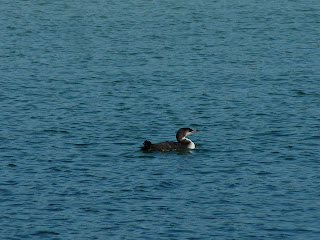 We’ve been seeing and hearing loons for a few days and I finally got a photo of one. 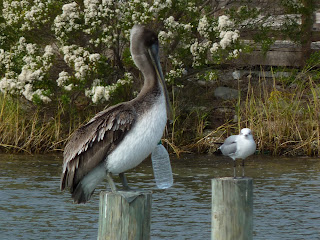 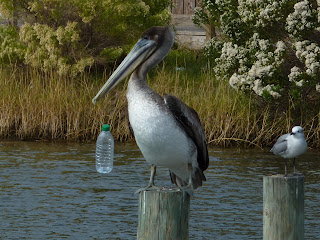 After we were settled at the FWB city dock, I noticed a pelican on one of the pilings close to the boat so I went out to get a photo of it.  When he turned his head I was horrified to see that there is a water bottle attached to the poor thing.  We couldn’t tell if there is something around it’s neck or if it swallowed something that was attached to the bottle.  Before we could think of anything to do, he flew away. 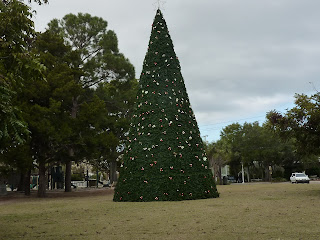 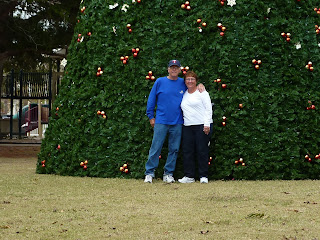 The city has a huge fake Christmas tree up set up in the park adjacent to the docks, so we used the self-timer on our camera and got our portrait. 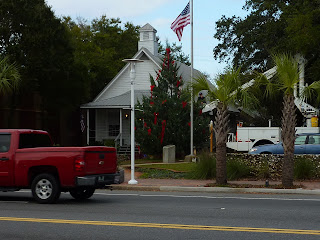 We walked a couple of blocks from the waterfront and found a number of charming shops and restaurants.  Many of them were decorating for Christmas.  We didn't have to go far to find a place selling seafood, so we picked up some red snapper for our dinner tonight and a Florida lobster tail for tomorrow night that we'll share. 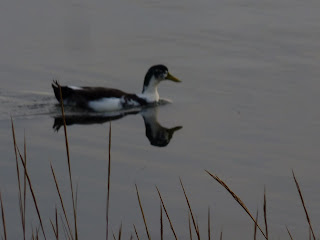 After we got back to the park, I found a bench overlooking the water and planted myself there while Joe went to put away our seafood.  He came back to join me and we watched the squirrels, ducks and seagulls.  One of the ducks appeared to be a cross between maybe a mallard and a domestic white Pekin; hanky-panky in the park! 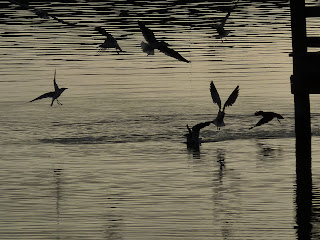 There were schools of little fish that were swimming close to the surface of the water and a flock of seagulls were having a feeding frenzy swooping down and snatching them out of the water.


About 4 we went back to sit in the cockpit and enjoy happy hour while we watched some fisherman on the docks by us.  Unlike the seagulls, none of them were having any luck and they soon left.
By 4:30, the wind died down completely and the water was like glass, but about 8 the wind started picking up and now it's blowing about 15 mph and the lines and docks are creaking and groaning; that's the problem with a tie-along situation.  When we're in a slip, we have lines from two sides keeping us in place and when we're anchored out somewhere, we might swing around from the tide and the wind, but at least we're not banging into anything.
Sure hope we can get some sleep tonight.
Posted by MaryJo Boyle at 10:25 PM