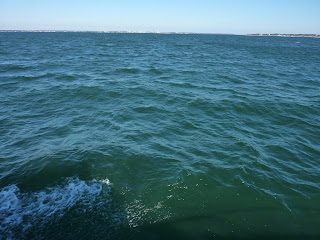 We woke to brilliant sunshine this morning, but it was quite windy.  We left our anchorage at 9:30 and headed towards Pensacola. 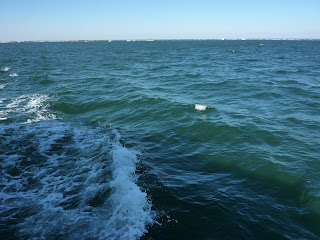 Paradise was rockin' and rollin' again. 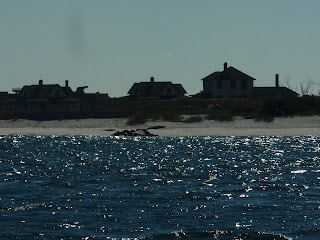 Shortly after we got underway, we passed Fort Pickens which is located on an island that is part of the Gulf Islands National Seashore.  The fort was completed in 1834 and was the largest of four forts built to protect Pensacola Bay and its navy yard.  Ten concrete gun batteries were built from the 1890s through the 1940s but atomic bombs, guided missiles and long range bombers made such forts obsolete by the end of World War II and the Army abandoned the forts.  The Gulf Islands National Seashore offers both developed and primitive camping and visitors can enjoy bicycling, swimming, snorkeling, fishing, hiking, beach combing, bird watching and boating. 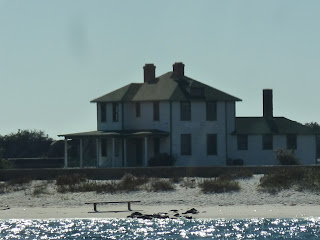 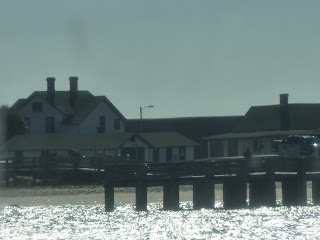 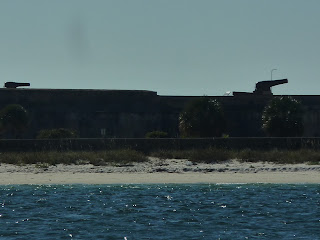 Two of the cannons still at the park. 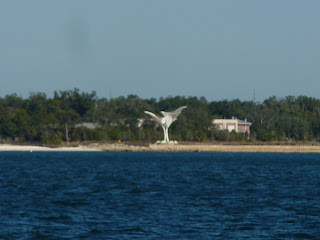 On the mainland, across from Fort Pickens we saw this statue at Warrington, FL but we weren't close enough to figure out what it is and I cannot find any information on it; wish we could have gotten closer.
Anyone have any information? 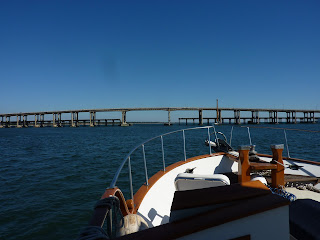 We're by Pensacola in this photo; you can see how clear the sky is, and we were more protected from the wind when we reached this bridge at around 11:15 so it was a much pleasanter cruise after that.

That's all the photos I have from today, but I'm so excited to tell you all that Joe figured out a way for me to get off the boat and into the dinghy!!  I'm absolutely thrilled because now I can get off of Paradise and go swimming and go on "expeditions" to all the beautiful and interesting places we're passing.
It came about because we needed some provisions and we were passing Navarre, FL where our Skipper Bob guidebook said there was an anchorage and a Winn-Dixie and other stores right across the street from the waterfront.  Joe suggested anchoring the boat so he could take the dinghy in to get what we needed.  I was so frustrated about not being able to climb down the ladder to the swim platform that I told Joe I was going to get down there some how, no matter what because I knew that it wouldn't be any problem getting in and out of the dinghy once I was on the swim platform.
When I went out to the cockpit, Joe had the dinghy in the water and he had already figured out that I could ride the davit down.  It was a little scary at first and we didn't get photos, but it worked like a charm going down and coming back up again.  Our nephew, Scott Allen, suggested a month or so ago that we should have someone following us to take movies that we could post on the blog.  I sure wish I could see a movie of my first rides on the davit!!!
By the time we left Navarre it was already 3:30, so we had to hustle to find a place to anchor before sunset.  We found a spot about half an hour later and dropped the anchor.
Tonight we had a thoroughly Southern dinner of shrimp and cheesy grits that was fabulously delicious and so easy that peeling the shrimp was the hardest part.  And we have leftovers for lunch tomorrow!
Posted by MaryJo Boyle at 10:18 PM