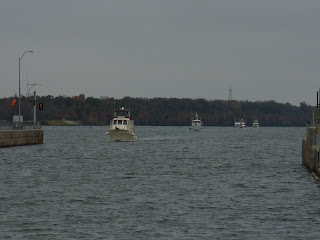 After a peaceful night we got started at 7:45.  Last night we anchored just north of this first lock for today and as we pulled into the channel the lock was open...

...and we saw 5 other trawlers coming up behind us. 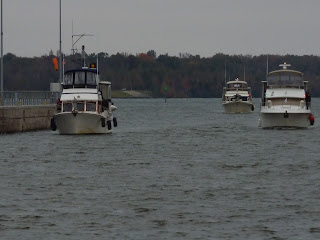 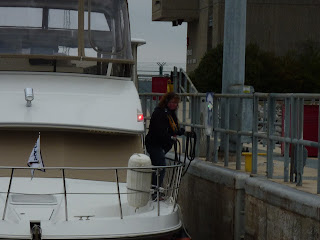 It was fun to have so many Loopers together and everyone of the boats was made by a different manufacturer.  There was "Sea Ya", "Papillon" (a Kadey Krogen), "TerrMar IV" (a North Pacific), an Oceania, "Boreas" (a Carver), and "Paradise" (a Marine Trader). 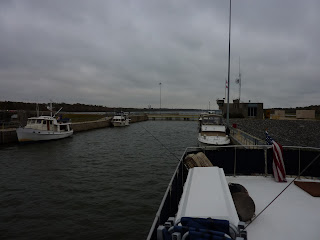 Here we all are exiting the lock. 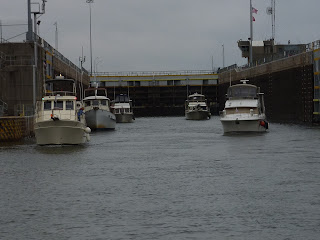 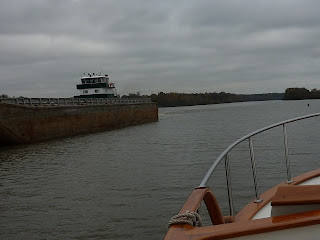 Shortly after that, we encountered a northbound tow; when he saw what was coming towards him, he got on the marine radio and said “Y’all got a convoy”.
Though the canal is scenic, it’s also quite narrow.  As we were approaching the tow, I thought it was going to be a little crowded in the channel, but Joe wasn’t worried. 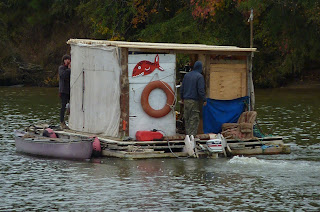 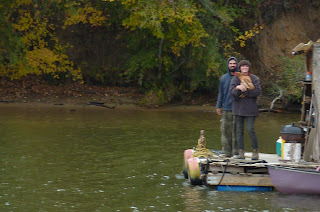 We saw another shanty boat today with a man, a woman, and a cat.  With just 3 sides enclosed, it didn’t look as warm as Wayne’s boat back at Hoppie’s and the weather is just as cold as we had there.  We haven’t seen or heard anything about Wayne and Bentley, his dog. 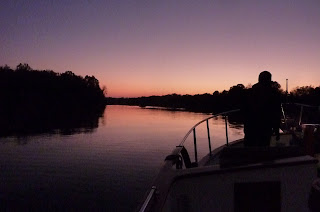 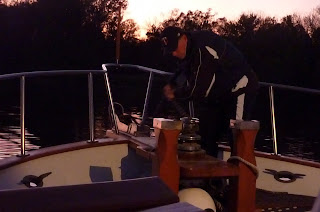 Two boats in our convoy dropped off just before the 3rd lock, then we lost 3 more after the 4th lock and we went through the 5th lock by ourselves.  We continued on another 16 miles and dropped anchor just off the channel about 6:30.  We’ve been quitting around 4:30 or earlier, so it was a little scary navigating unknown waters after sunset, but everything seems to be okay.
Tomorrow night is the end of daylight savings, but Joe said he has no intention of getting up at 5:30.  We’ll see…
After dinner, Joe noticed activity on the bank of the river just a little north of us.  There were flashlights, some small boats and people doing something; he thought it was some dredging or something but it sure didn’t look like an Army Corp of Engineers operation to me…I told him to be sure to lock the all of the doors tonight.
We made it through 5 locks today and went 74 miles.  We’ve been gone 24 days and we’re at mile marker 218 tonight, which means it’s only 4 more locks and 218 miles to Mobile, AL!
Posted by MaryJo Boyle at 3:17 PM