Thursday
We only plan to cruise for 4 hours or so today, so we slept late and I caught up on my blog entries.  It was nice to spend a second night in a slip with shorepower--turning on the coffee and the heat doesn't require firing up the generator.
The other Loopers that we've been socializing with here are sticking around Green Turtle Bay for a few more days and/or heading out for Nashville; we hope to see them again before too long. 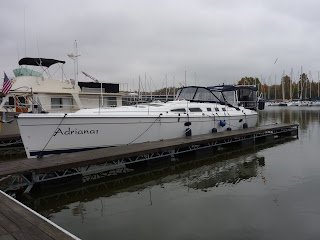 This gorgeous Hunter 49, Adriana I, is from Ontario, Canada...


...and belongs to Bill (far right) and Shawny (in the middle) who are shown here with Kevin Rabbett (on the left). 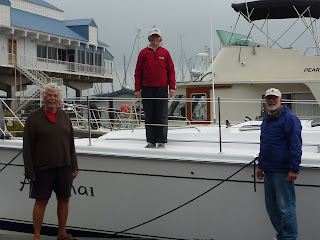 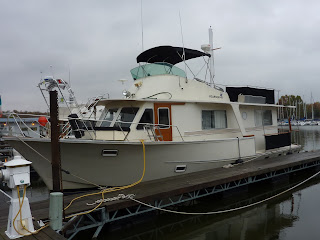 We met Kevin this summer at Sunnyside where he keeps his boat Irish Rover, a 43' Pearson motor yacht. In the "it's a small world" category, the former owner of Irish Rover (also a Sunnyside boater) drove to Michigan in 2010 to look at Paradise when she was still for sale. 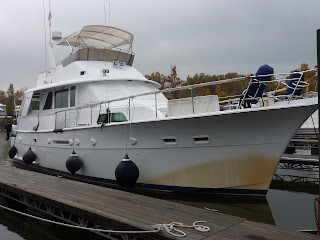 Here's Algonquin, a 53' Hatteras with the tell-tale Looper "mustache".  The owner wasn't around while we were there so we didn't get to meet him. 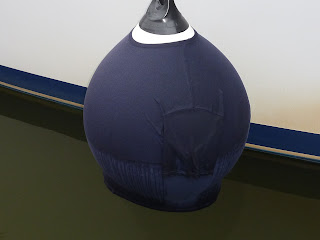 I wanted to tell him how much I love the blue T-shirt fender covers! 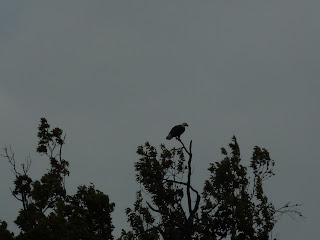 After a pumpout we left Green Turtle Bay marina at 11:30.  We cruised a short distance to the canal that connects Barkley Lake with Kentucky Lake.  Kentucky Lake is 184 miles long, but it has so many bays that it boasts over 2,000 miles of shoreline!


This bald eagle was keeping an eye on the lake activities.

It was a really miserable, cold, rainy day, which was disappointing because it's such a beautiful lake and we really wanted to be up on the flybridge. 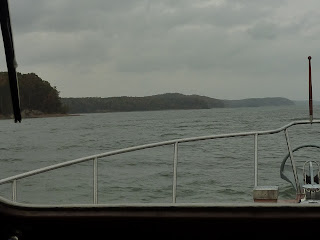 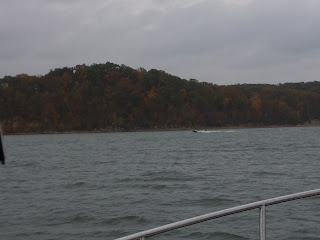 We saw a lot of fancy fishing boats on the lake, most likely participating in a local fishing tournament. 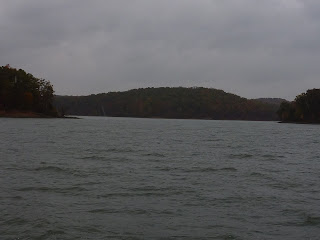 Joe was looking for an anchorage that some other boaters had said is a good one, but when we tried to get into it, we ran aground.  Ruh-roh!  Fortunately, Joe is cautious in unknown waters so we were going slowly and he was able to back off the sandbar.

Finally, we found an amazing anchorage in the bay just south of that one.  Lots of fishing boats came and went, hopefully we didn't spoil anyone's fishing. 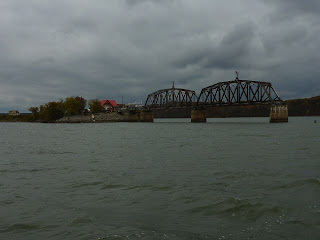 The weather is a carbon copy of Thursday--cold and grey skies with occasional rain.  We cruised another 40 miles or so looking for a spot for the night.

We came upon the remaining sections of a bridge that has been mostly removed and decided to check out the bay just south of it as our anchorage for the night. 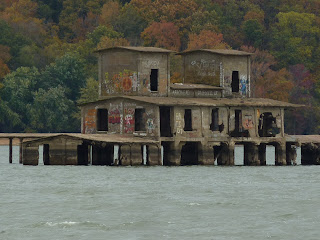 This abandoned dock was in the same bay. 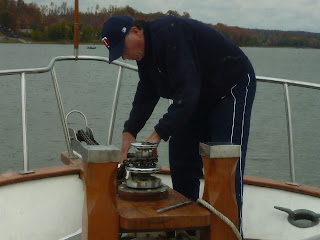 We liked what we saw...so here Joe is setting the anchor for the night. 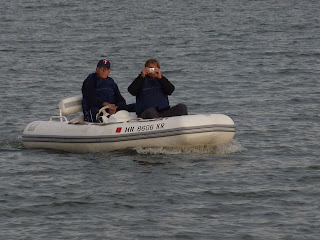 While I was starting dinner, the guys decided to take a little ride around the bay.  When they came back, I snapped a photo of Phil getting a photo of me and Paradise. 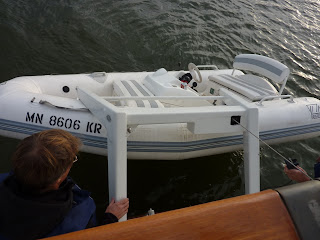 Here's the dinghy being brought back up on the davits for the night. 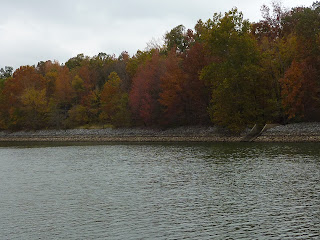 The skies got a little brighter later in the afternoon and it was a really lovely spot to spend the night.
Posted by MaryJo Boyle at 6:12 PM