We had so much fun today!
The skies were mostly cloudy when we woke up and it was a bit windy and chilly, but by 9 or so  it was beginning to look promising with the sun and blue sky peeking through. 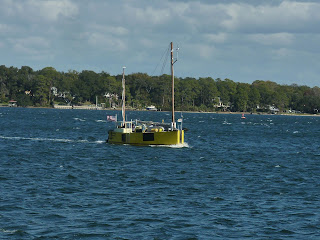 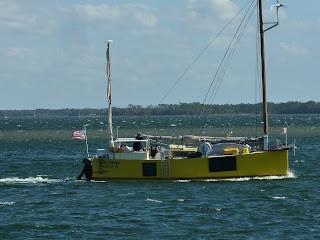 While we were having coffee, this interesting homemade sailboat passed us. It appears to be made out of plywood; we couldn't tell if the dark areas on the side are solar panels or windows, but since solar panels are usually horizontal, we decided that perhaps these are windows.


As I mentioned yesterday, there was a lighted boat parade planned for tonight, so I sent an email to the local Looper "Harbor Hosts" to ask their advice on the best place to watch the parade.  Harbor Hosts are folks who volunteer to offer some or all of the following: "...navigational aid, transportation, advice on restaurants, sights, marinas, repair facilities, etc, local history and interesting side trips, perhaps even a hot meal or glass of wine while swapping Looper yarns." 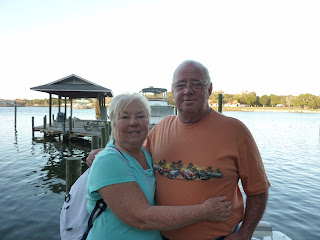 Panama City's Harbor Hosts are Greg & Carl Vernon and they go out of their way to offer all of the above assistance plus warm Southern Hospitality to Loopers; on Thanksgiving they hosted 28 Loopers for dinner at their home.  We hadn't heard about it because I didn't know enough to sign up for the Looper notifications (I'm sure signed up now!!!) and we weren't in contact with any other Loopers that we've met along the way.  But when we saw Ken & Pat (m/v 20 Buck$) at Bayou Joe's yesterday, they told us about it and said that it was a really great time.
Rather than just giving us the information we requested, Greg and Carl's response was to invite us to their home since we missed the Thanksgiving gathering.  They gave us the option of either going by dinghy directly to their home on the waterfront, or, if we preferred to take our dinghy to the Panama City marina, they would pick us up there.  The wind started blowing harder almost immediately after we got off the phone with the Vernons, and we debated about what we should do, but we thought it would be more fun to take the dinghy to a part of the town that we hadn't seen before.  By the time we were ready to leave the water looked like it was getting pretty rough, but Joe put on a water-resistant jacket and pants and I put on a mostly-water-proof jacket and off we went.  Well, about 30 yards from Paradise I started getting sprayed with water over the starboard bow, and it turned out to be a lot longer to Greg & Carl's than we thought.  As we entered the middle of the channel I was getting full-body sprays every few seconds, I was spitting out salt-water over the port side and my eyes were burning from the salt water.  By the time we entered their bayou I was completely soaked from head to toe and Joe was mostly wet, but I'd do it again in a heartbeat.  I love riding in the dinghy!!!
Fortunately, our camera and the long sleeve shirt and sweatshirt that I brought all stayed dry in our tote bag that was stowed on the floor on the port side behind me and next to the steering console.  When we got to their house, Carl and Greg immediately made us feel welcome by giving us hugs, offering to dry our clothes, and bringing refreshments.  We had a great afternoon and also met Loopers Roy and Elvie Short (m/v RoyEl) who were staying with Greg and Carl for a few days.  During my conversations with Greg and Elvie, we discovered that both the Vernons and the Shorts are friends with Ken and Brenda Bloomfield (m/v Tellico Lady--a sister ship to Paradise) and Jim and Sharon Angel (m/v Blue Angel).  Joe and I have followed the blog of and/or exchanged emails with both the Bloomfields and the Angels since last year.  It's such fun to make these connections!  Blue Angel is currently at Caladesi State Park, near Dunedin, so we're hoping to finally get to meet Jim and Sharon in the next week or so.

We reluctantly left the Vernons and the Shorts, got in the dinghy and made our way back towards the Panama City marina to watch the boat parade.  When we got there we found that we had plenty of time before the parade started, so Joe fueled up the dinghy and I went in search of a place for us to watch the parade.  I walked over by the water and saw a bench that two folks were sitting on, but there was plenty of room for at least one more person, so I approached to ask their permission to sit next to them.  Before I could even open my mouth, the nice lady urged me to sit down next to her.  Pretty soon, Joe came over and he joined us on the bench.  They introduced themselves as Jim and Florence Fortier and we chatted for a while about the parade and boats, and they said that they're sailboaters.  During the course of the conversation I mentioned where we had been this afternoon and how much fun we had and it turned out that Jim and Florence are friends of the Vernons.  Panama City has a population of 37,000, what are the chances that this coincidence would occur?! 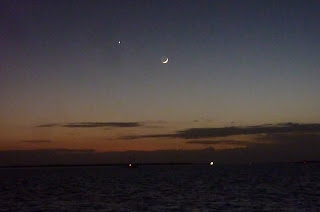 While we waited for the parade, we caught the moon and a planet and the last of the light. 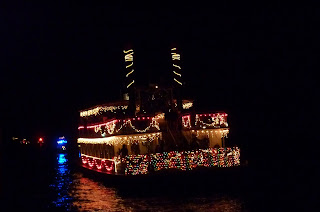 There were 11 boats in the parade and we had a great time, except when the "Betsy Ann" went by with people throwing candy into the crowd on shore. Some men on the boat were throwing candy as hard as they could and one piece hit Jim Fortier right in the eye; Florence said that Jim just had cataract surgery three weeks ago.  Hopefully, he'll be all right, but it certainly is worrisome.  I think just about all the municipalities in Minnesota have forbidden people in parades from throwing candy for that very reason. 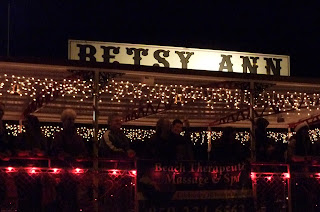 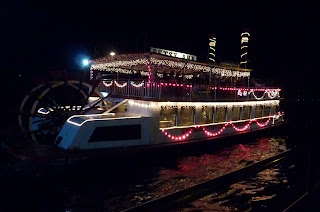 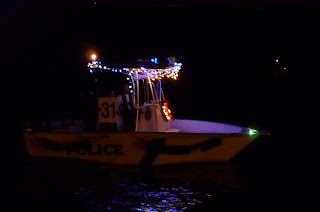 Next was a police boat...


...then a cruiser with a Santa in back 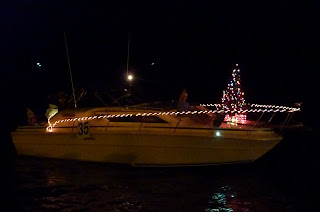 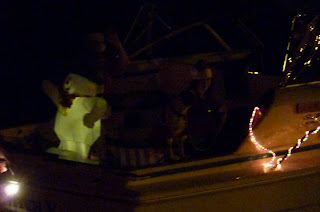 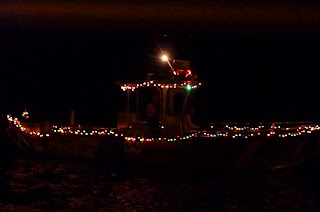 then a fire department boat 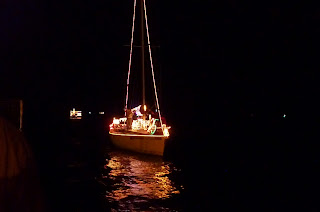 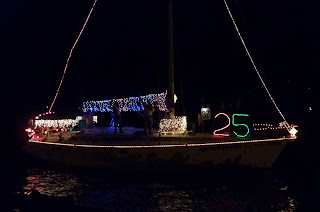 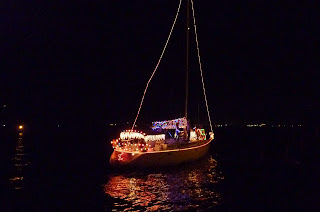 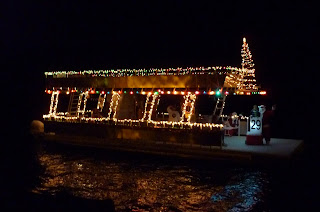 I couldn't tell if this boat, Island Dancer, is a private boat or an excursion boat. 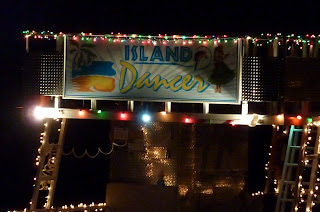 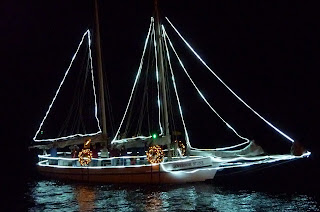 I think this was my favorite because it looked so elegant.  The Governor Stone is a wooden schooner built in 1877 and is the last known survivor of a class of vessels once numbering in the thousands.  In 1991, the boat was designated a national historic landmark and is registered as a Florida antique vessel. 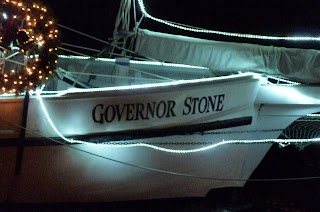 You can find more information about this fascinating ship at this website:
http://www.governorstone.org/about.htm 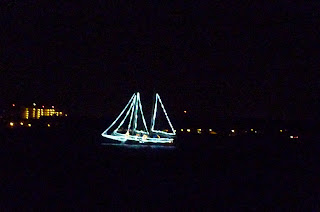 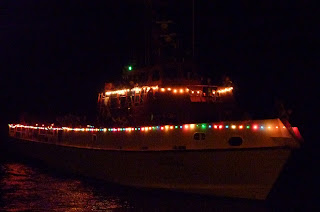 When this United States Air Force boat came by, everyone cheered.  Tyndale Air Force Base is just a few miles south of Panama City, so perhaps the boat came from there. 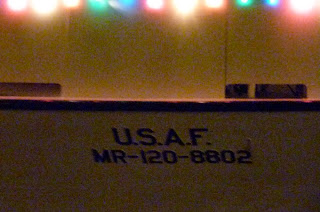 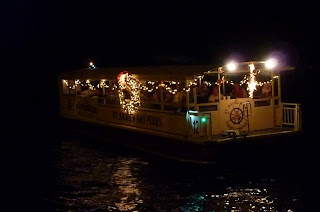 Here's the St. Andrews Ferry boat that we saw yesterday at Bayou Joe's. 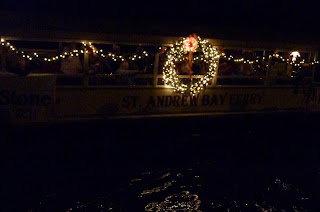 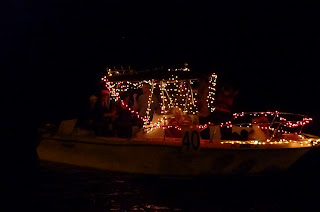 And bringing up the rear was another privately owned cruiser. 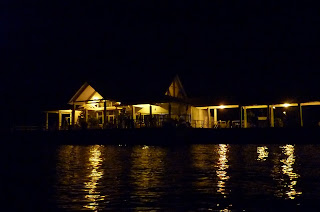 As we left the marina in our dinghy, we were relieved to see that the water had calmed down considerably. 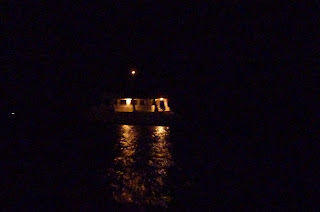 It only took a few minutes to get back to Paradise.
As soon as we were aboard, I headed into the shower to wash off all of the salt that I had accumulated earlier, and Joe followed soon after.

I'm so glad we stayed in Panama city for the boat parade.
Tomorrow we'll leave for Apalachicola with a stop on the way for fuel, a pumpout, and water.
Posted by MaryJo Boyle at 11:56 PM