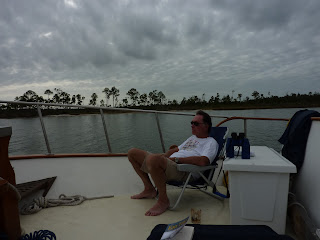 On Monday morning, we decided to stay a third night at the same anchorage at Ingrams Bayou since we are no longer in a hurry, we had a good internet connection, and it is a peaceful spot.  We spent the day just relaxing and enjoying the nice weather. 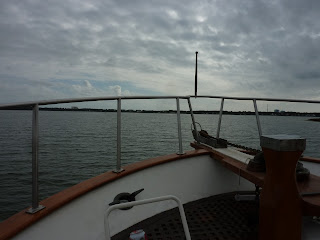 After dinner Joe sat down to watch the Vikings/Packers game on the laptop and I planned to update the blog on the PC.  About 10 minutes later, we lost the internet connection!  GRRRRRRR.  As it turned out, it was just as well Joe couldn't watch the game...

So late on Tuesday morning, we left and headed east.  Our plan was to go to Pensacola Harbor where we would get fresh shrimp from Joe Pattis Seafood, then find an anchorage for the next couple of days.  We agreed that I need a lot more experience driving the boat (I've never driven any of our five boats more than maybe 1/2 of 1% of the time), so I drove most of the way while Joe sat next to me giving advice and answering questions. 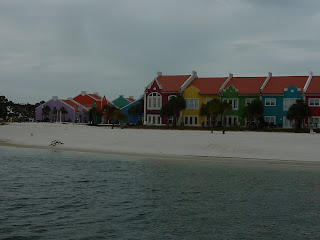 We saw lots of nice houses on the waterfront, many with backyards that were actually beautiful beaches right on the GIWW, but I couldn't take photos since I was driving.  Joe got this photo of an unusually colorful housing complex; notice their beach.

During the trip, there were a few heated words exchanged between the instructor and the student driver, but it was all forgotten when we passed a little shack right on the waterfront at MM 172 with a sign that said "Perdido Seafood".  Buying seafood there would save a long trip into Pensacola, so we turned around and I took sole charge of Paradise bobbing around in the channel while Joe took the dinghy back to the shack to buy our dinner.
With a light wind, the tidal current, and the narrow channel (sorry no photos--I was too preoccupied), I was an extremely nervous student driver, but fortunately, it took Joe less than 15 minutes.  He came back with oysters, shrimp and grouper--our three favorites! 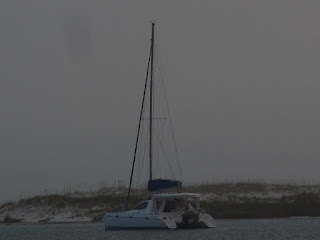 As soon as the seafood was safely tucked away, I happily turned the wheel over to Joe and we left to look for an anchorage.  We found one not very far into Big Lagoon (around MM 174) where a catamaran sailboat was already anchored.  It's a roomy anchorage and it didn't take us long to get settled in.  This is a really beautiful spot that's part of the National Seashore and is undeveloped. 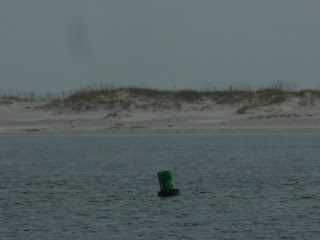 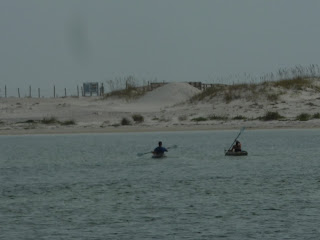 As we ate, we watched folks in kayaks, and some on stand up paddle boards, and fisherman in small boats, and lots of pelicans diving for fish. 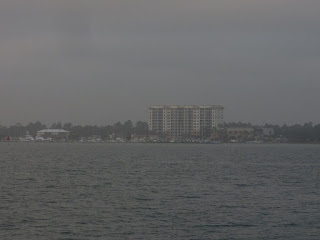 This is view of the mainland from our anchorage.

We hoped to see some Blue Angels doing practice flights from the Pensacola Naval Air Station, but it turns out that we were a week too late--they've left for their winter base in California.
There were, however, other aircraft from the NAS that flew overhead throughout the day. 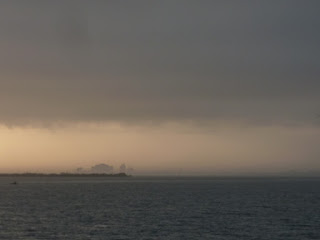 Late in the afternoon, this fog started rolling in and I thought of another verse of Tin Cup Challice "Salt air it ain't thin, it can stick right to your skin and make you feel fine, makes you feel fine."

I made French bread to go with our shrimp dinner.  I think I've finally figured out the solution to our oven over-browning the bottom of baked goods.  I checked the oven temp and it's running true, so I started setting the oven temp down by 25 degrees and checking for doneness 15 or 20 minutes sooner than recipe directions say and that seems to be working.

This is a great anchorage, except there's some work boat that goes back and forth every couple of hours with a big wake that sets Paradise rocking and rolling.
Once again, we lost our internet connection early in the evening, so it was back to playing computer Solitaire for Joe while I read my Nook.  It's hard to understand
Posted by MaryJo Boyle at 11:50 AM