When we get someplace where we can buy a replacement device for transferring photos from our camera to the PC, I'll add the photos that go with this narrative. 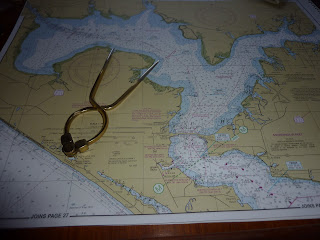 We woke to 61 degrees, and grey skies with occasional light rain but once again, we're not traveling too far today so it's a leisurely morning.

After coffee and reading the (on-line) Star Tribune, Joe starts planning our route for the day.  He uses a brass compass to calculate distances on the charts. 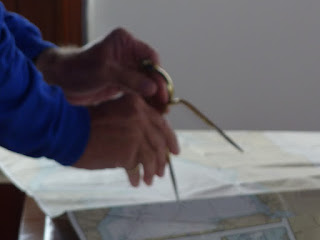 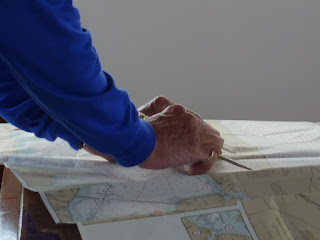 It was a bit windy, so we enlisted the aid of a local fisherman on the dock to hold one of our lines until Joe was back on board Paradise and we safely pulled out at 10:15. 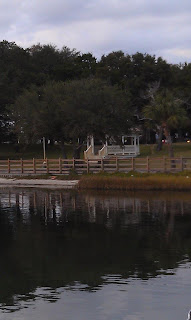 This is a photo of the park that I forgot to post yesterday. 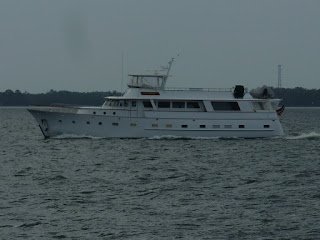 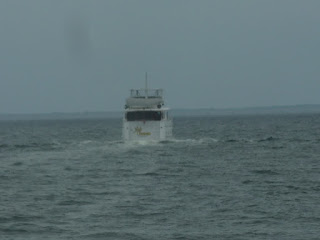 About an hour after we left, we saw another boat a long way behind us so we kept an eye on her so we'd know on which side she'd want to pass us.  Soon Joe's cellphone rang and it was Capt Randy Boler--it turns out that the boat following us is the Lady Chateau from Stillwater on her way to her winter home in Fort Lauderdale.   Randy has cruised these waters many times and he starts earlier in the morning and keeps going later in the day than we do; he also cruises a bit faster than us so he soon passes Paradise and continues on.  Lady Chateau is scheduled for a dinner cruise in Fort Lauderdale the first weekend of December, so she has quite a few miles to cover in the next 2 weeks 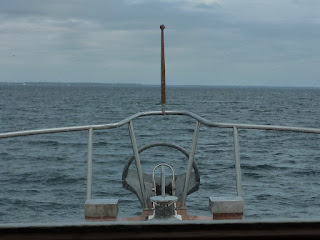 We're crossing Choctawhatchee Bay today, a relatively large but shallow body of water that is part of the GIWW system.  Although we're going into a headwind there's just a moderate chop so it's pretty easy traveling.  When we do the 24-hour Gulf crossing from Appalachicola to Tarpon Springs I hope we have conditions as easy as this because that crossing can be rough, and often has to be delayed due to storms and/or high winds.  My brother, John, has agreed to help us do the crossing the week after Thanksgiving; it was John who helped Joe bring Paradise back to Minnesota from Michigan after I broke my leg. 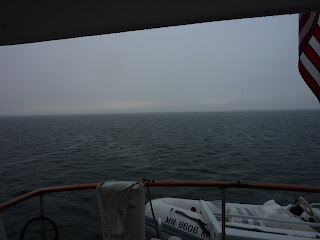 Just east of the Mid-Way Bridge across the Bay from Niceville to Destin we headed in towards the southern shore to anchor for the night.  Southeast winds are predicted so anchoring on this side of the Bay will offer us some protection from the winds during the night.

Pretty soon, the occasional light sprinkles turned into a steady rain but the temperature remained in the high 60s. 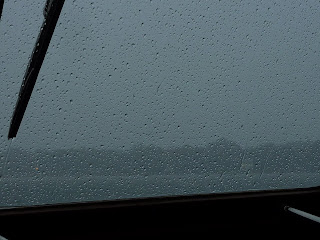 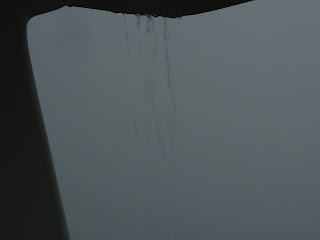 Tonight's dinner included fettuccine Alfredo and the frozen lobster tail that we bought in Fort Walton Beach yesterday--OMG!  The only thing that could have been better is if the lobster was fresh right out of the water.
Tomorrow we plan to make it all the way to Panama City and stay there a couple of days.
Posted by MaryJo Boyle at 8:22 AM