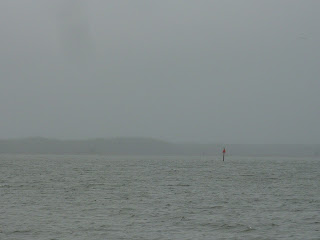 Today started out at 53 degrees with rain and we were on our way at 9:15 central time.

The wind was much weaker than yesterday and it had changed direction, so it wasn't much of a factor today--just the temperature and the rain.  We both went from shorts, T-shirts, and sandals just a few days ago to long pants, 3 layers on top, and shoes & socks today. 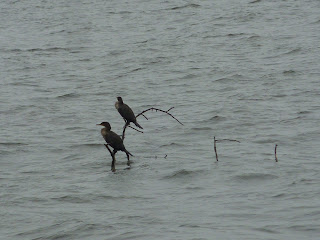 Even the birds we saw this morning were hunkered down and waiting out the rain. 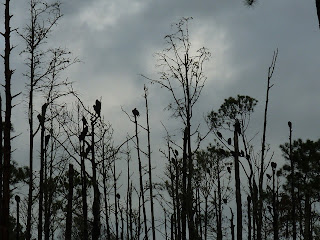 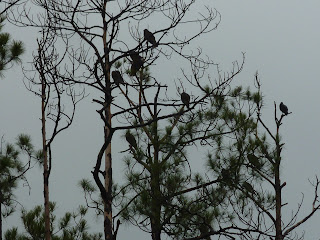 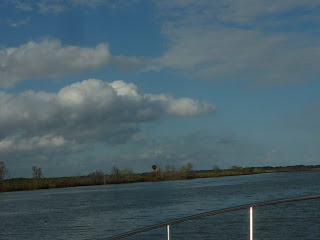 Eventually we left the rain behind and we saw blue sky and sun; the temp got up to about 61 degrees.

For nearly all day the GIWW was like a canal so it was easy cruising, but there were a few logs floating here and there that we had to avoid. 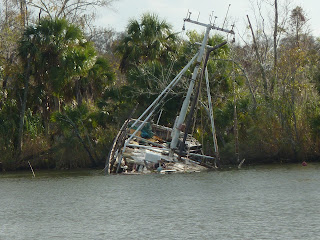 We came upon this wreck, probably from one of last year's hurricanes. 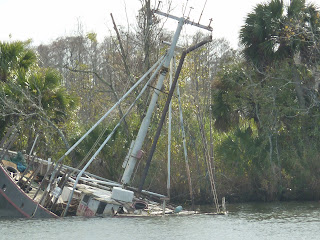 The red lettering on what's left of the cabin says "no trespassing". 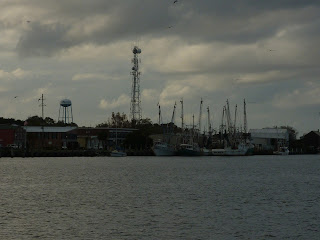 We left the Central time zone and reached Apalachicola at 4 pm Eastern.

This is the waterfront of the town and we're anchored right across the channel.  There's a dinghy dock (at the left side of the photo) where we can tie up and walk into town. 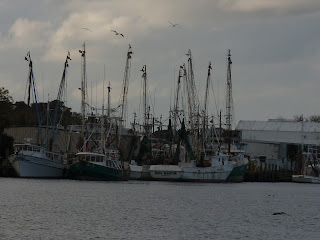 The wind picked up tonight, it's raining again and the temp is going down to the low 40s, but the next few days are supposed to be at least partly sunny with highs in the low 60s.
It looks like now we can't cross the Gulf until Thursday because of the winds and waves so we'll have all of tomorrow to go into town and explore; Apalachicola is a major oyster harvesting area, so we'll be looking for a place to buy fresh oysters (YAY!), and there's a maritime museum, parks, historic downtown, plus we need some groceries and supplies--lots to do and see tomorrow.
On Wednesday we'll catch up on laundry and make sure that everything on Paradise is stowed away and secured for our expected crossing on Thursday.
My brother, John, has business that requires him to be out of town on Thursday so Joe and I will be making the Gulf crossing by ourselves.  We've talked to several other couples who have done the crossing multiple times and they've all done it with just the two of them.  If they can do it, so can we!
Posted by MaryJo Boyle at 10:32 PM