We were both tuckered out from our trip into town yesterday and all the walking we did before we discovered the bus system, so we both practically collapsed into bed last night; the temperature dropped to the high 50s and it was comfortable sleeping.
We woke to a beautiful morning with the temperature already in the 70s.
Joe wanted to head into town early so we set off in the dinghy at 9:30 to catch the 10 o'clock bus at the marina. 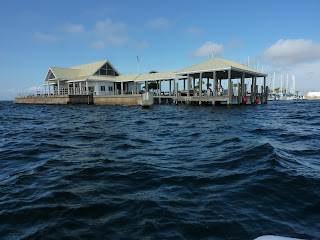 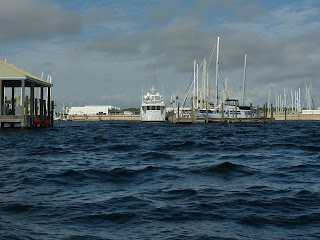 While it was a beautiful morning, there was a bit more wind than yesterday and we were kind of bouncing around on the waves but I stayed dry even though I was sitting in the front.  On the way home, however, I got sprayed several times and was so full of salt water that I had to take a shower and put on clean clothes before I did anything else.

The municipal marina is quite nice 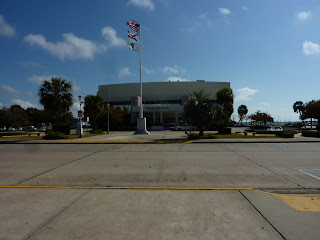 and Panama City's civic center and 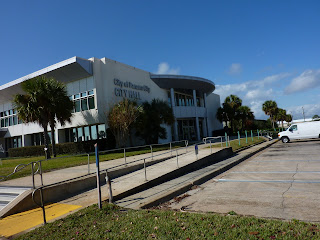 city hall are right next to it.

We caught the bus and got dropped off in front of Wal-Mart.  We found everything on our list within 15 minutes, so after checking out and repacking our purchases in our own sturdy cloth bags, we still had 30 minutes to kill before the bus returned.  We walked out to the shaded bus stand and sat people-watching and enjoying the breeze. 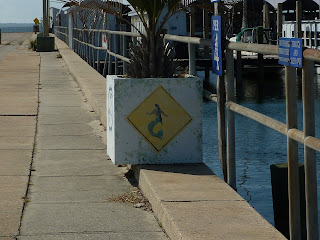 We made it back to the marina at Noon and headed for the dinghy. 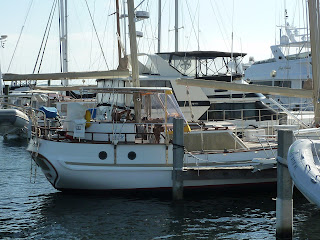 This motorsailer caught our eye--I sure would love to see the inside of it.

We got back to Paradise and unloaded all the groceries and we have all we need for our Thanksgiving dinner. 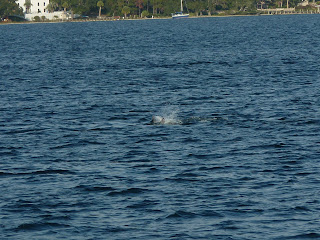 Late this afternoon Joe noticed activity out in the water (I tried to capture it with the camera, but I couldn't get much of the action because it was so fast).  Some dolphins were herding fish to catch and eat.  Some of the fish would leap in the air to escape but the dolphins seemed to be doing doing better than their prey. 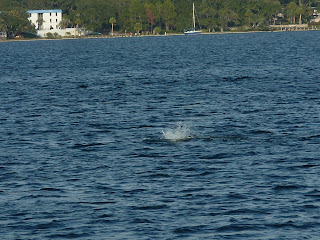 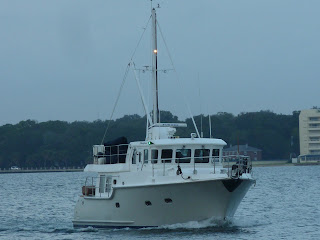 While we were enjoying happy hour on the aft deck, this Nordhavn trawler came in to anchor near us in Smack Bayou--what a beauty. 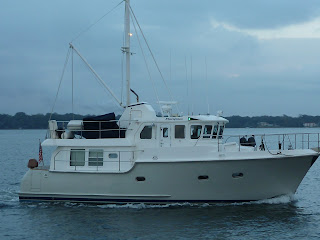 After sunset tonight we had pouring rain sweep through twice within an hour and more is coming later tonight.  We had the back door open to the aft deck and the rain was really loud.  Although it's humid, the temperature is comfortable, so we still have the back door open and we don't need to turn on the A/C.

We've made a slight change in our plans because of the weather.  There's a cold front coming from the west (it's over Texas right now) which will bring winds from the north within the next day or two that will last for a few days--not good conditions for making a Gulf crossing.  So we're thinking we'll stay here by Panama City until Friday, then go to Apalachicola.  The winds should return to their normal pattern from the southeast by Monday and we're figuring we can start the crossing to Dunedin on Tuesday afternoon.
Tomorrow is supposed to be nice again, and since we're going to be sticking around here that means that maybe we can make a return trip to Bayou Joe's, in which case I might get that Dunk and Ugly peach dessert after all.  =0)
Posted by MaryJo Boyle at 10:45 PM