We woke at 5 and at 6:15 Joe went out to pull up the stern anchor.
I don't have any photos of the following events because we immediately went into action but they would have been doozies.
As he stood in the rain looking down over the cockpit railing, Joe discovered that the swim platform was half pulled away from the boat!  Last night he tied the anchor line to the swim platform to reduce the angle of the line so the anchor couldn't pull free, but with the combined effects of the tide and the current and the wind the strain was too much on the platform. Joe climbed down and untied the anchor line from the swim platform, then climbed into the dinghy and motored out to bring up the anchor which was stuck in heavy clay.  He finally got the anchor up, and I pulled him back toward Paradise which immediately started swinging into the trees.  Joe tried to push the swim platform back into position from the dinghy but when that proved impossible, we brought the dinghy up and he used rope to secure the swim platform to prevent it from falling off.
We then got the bow anchor up as quickly as possible and pulled out into the main channel.  What a way to start the morning... 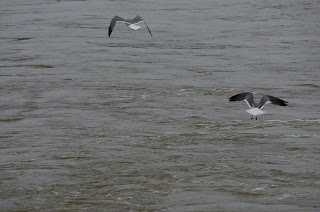 Today seagulls started following us to catch the small fish in our wake that are churned up by our engines. 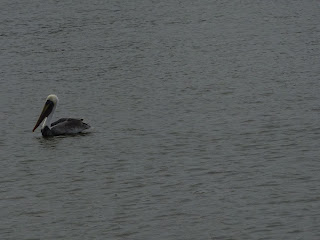 We're starting to see pelicans, a sign that we're getting close to Gulf. 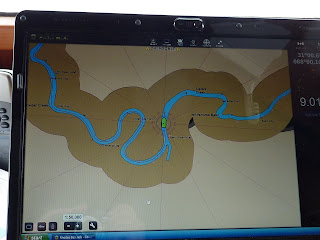 More winding river today.
It's 64 miles from our anchorage last night to the start of Mobile Bay, and another 24 miles across the bay to Dog River Marina.  We want to cover those 88 miles today but we don't know if we can because there's a railroad bridge that's been closed on and off for the past week at mile 14.  After the Coast Guard announced at about 9 AM that the bridge was closed Joe slowed down and started thinking about where we could anchor for the night.  Then, about an hour later the Coast Guard announced that the bridge was open again so we decided to go for it. 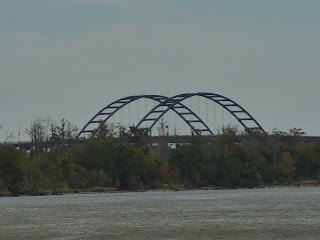 We traveled under this bridge that Joe dubbed the "Dolly Parton" bridge. 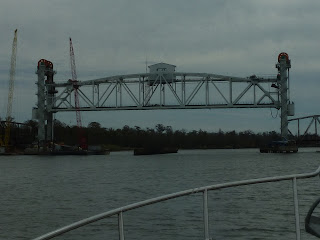 This is the railroad bridge that had been closed for repairs.  In the middle of the channel you can see the remains of the original swing bridge which were left in place for some reason. 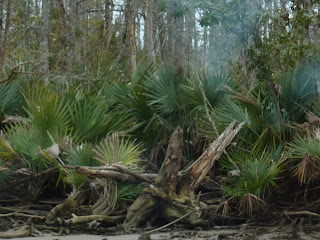 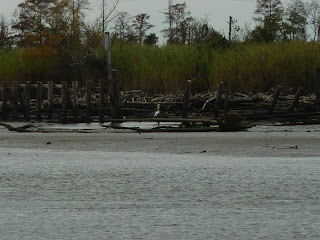 We came through an area that had massive amounts of driftwood on both sides of the river.  It reminded me of when our youngest daughter, Amy, was little she always wanted us to bring home any driftwood that she saw when we were cruising on the St. Croix River. 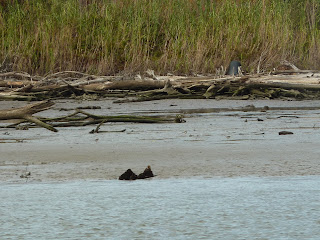 These photos are for you, Amy! 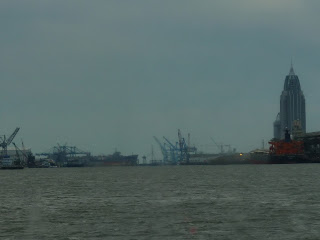 At last, we got to Mobile Bay.  Now THIS is a major shipping port. 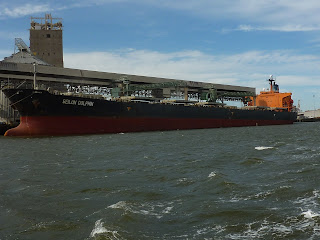 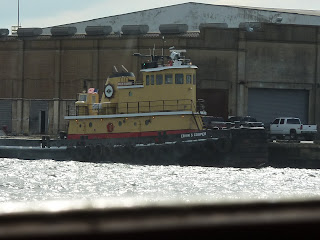 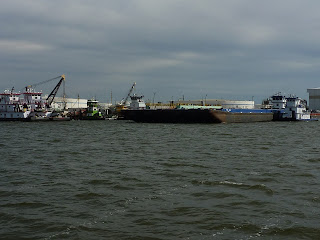 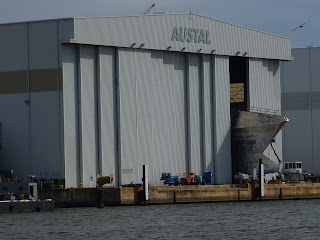 These are military ships that are being built or repaired. 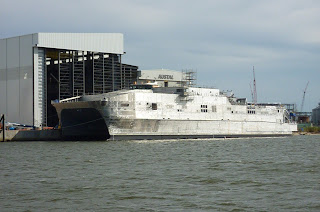 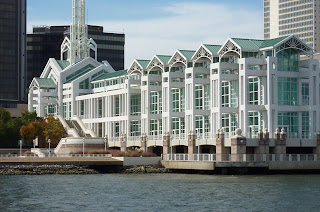 The waterfront of downtown Mobile. 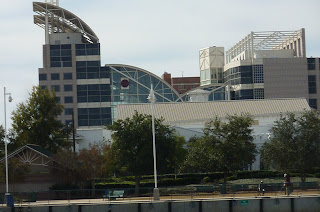 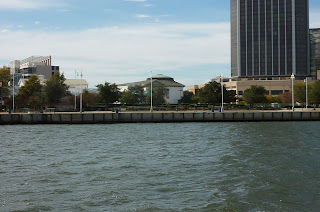 A city park on the waterfront. 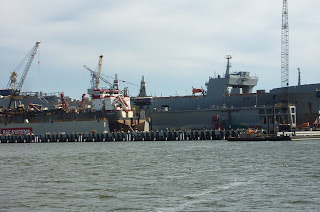 It's really awesome cruising through all of this in a little 50' boat. 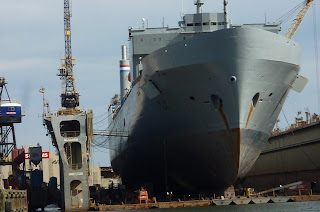 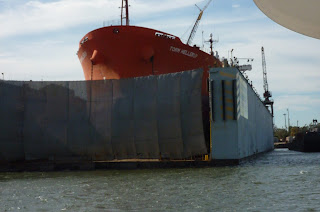 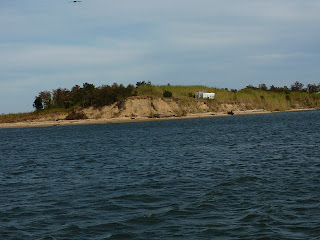 This island is south of and across the channel from the downtown area and Joe said it's used for some kind of testing by the military. 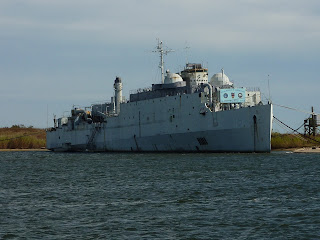 This boat is anchored at the island. 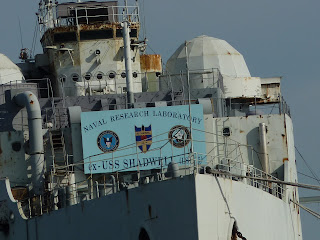 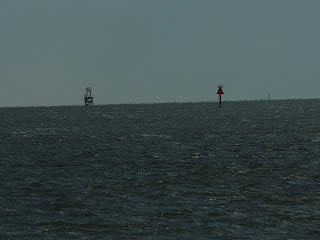 Now we've entered the channel out into the main part of the bay. 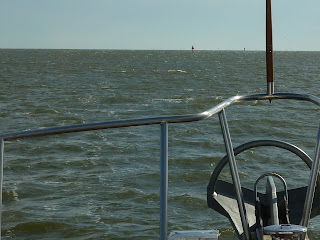 The wind is blowing 15 to 20 mph with gusts up to 30 mph. The mile markers are a couple of miles apart. 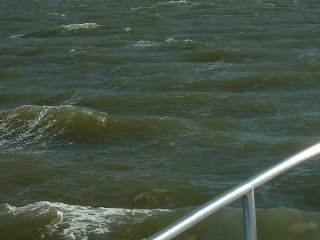 It is pretty rough out here and Joe and Paradise are fighting the wind and waves to stay in the channel. When we turned off the main channel to enter the one that would take us the 4 miles to Dog River Marina, we had a hard time finding the channel markers because they're spaced so far apart. The water depth is 6 1/2 feet in the channel and the channel is only 100 feet wide; our draft is nearly 5 feet and the water depth drops off sharply outside of the channel. I had to keep the binoculars trained on the markers while Joe kept watching the navigation software to make sure we were staying in the channel. 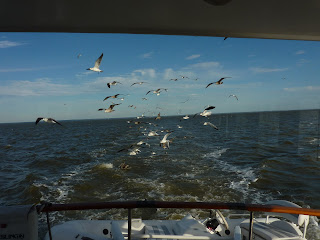 Now we've got hundreds of birds following us for the fish in our wake--seagulls and cormorants and pelicans, oh my! 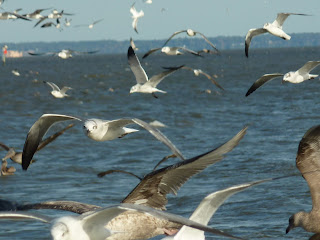 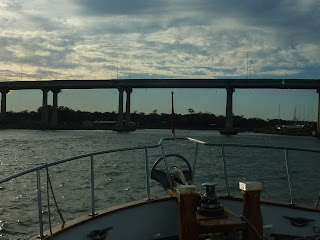 At last, we're almost to Dog River Marina.  It's been a harrowing last couple of hours with the wind and waves, but we made it.

It's okay to breathe again.

It only takes 2 or 3 hours by car to get from Demopolis to Mobile, but it has taken us 3 full days to get there by boat because of the winding nature of the river, the absence of safe anchorages at frequent intervals, and having to slow down for tows and small boats.

We've really been looking forward to fresh seafood so we got one of the marina courtesy vehicles and went to Felix's Fish Camp for dinner and had raw oysters and soft-shell crabs.  We discovered Felix's in 2010 when we drove to Florida for our vacation.  It was every bit as good as we remembered.
We're going to stay at Dog River for 2 nights so Joe can fix the swim platform and change the engine oil and we can rest up.
Posted by MaryJo Boyle at 8:37 AM